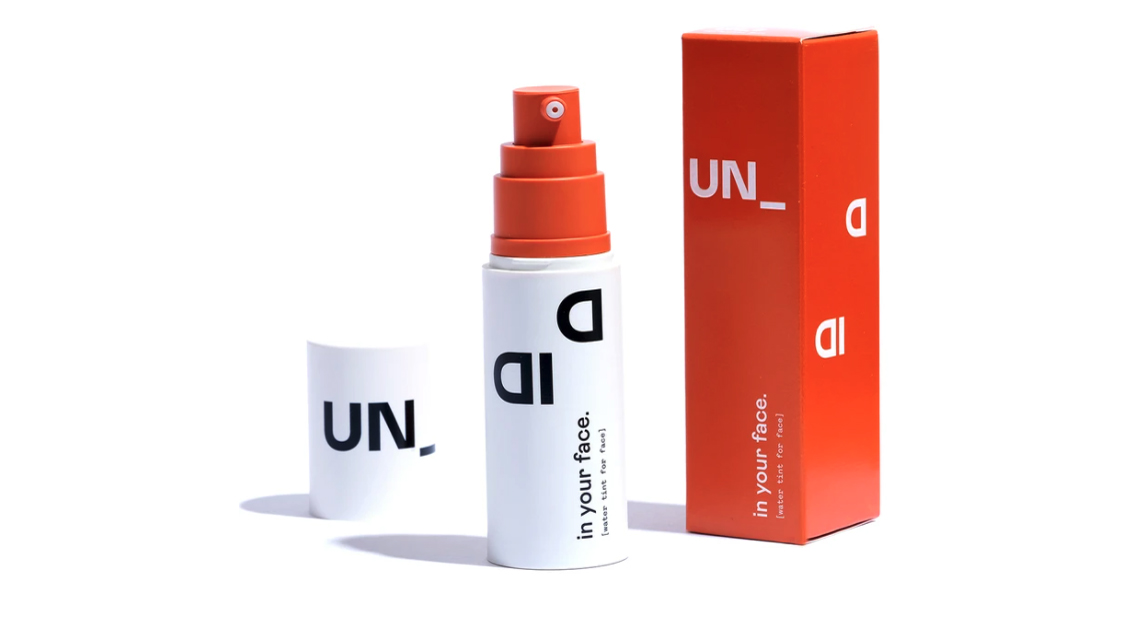 Makeup for men: How to get started with our pick of the best men’s makeup

Makeup for men is all about subtlety and boosting your confidence – helping you conceal acne, brighten dark circles, fill in your beard, and more

The men’s grooming and beauty market is expected to be worth more than £49bn by the end of 2021. Since the launch of so-called guyliner and manscara in 2008, makeup for men has evolved and it’s no longer the reserve of goths or a niche product.

In Ancient Egypt, kohl liner on men’s eyes was an indication of wealth.

French President Emmanuel Macron even spent £22k on makeup for his first three months in office, to look fresh.

Thanks to the likes of brands such as Warpaint for Men and MMUK Man, it’s a hugely fast-growing market.

There are even rumours that Harry Styles is looking to get in on the game with the launch of a gender-neutral makeup and fragrance line.

From exfoliating face masks, beard oils, men’s face creams, hair dye and much more the grooming game for men has stepped up to makeup, too.

We do appreciate that even the mere mention of makeup for men may make you feel uneasy but, judging by the fact you’re here in the first place suggests you’re ready to take what may seem like a leap.

And let’s set the record straight.

Makeup, skincare, haircare, and grooming are about being confident and feeling like the best version of yourself.

We understand that makeup can be misunderstood but it’s about enhancing what you have. Most importantly it’s an option, not an obligation.

The rise of makeup for men

Makeup for men isn’t new, but it is coming out of the shadows somewhat thanks to pioneering brands such as MMUK. Created in 2011 by Alex Dalley, MMUK understands the importance of modern-day men wanting to look their best every day.

For Alex, he said it started with wearing concealer, by borrowing his Mum’s makeup, from the age of 17 to cover his spots. He suffered from acne and on the night of his graduation it flared up to the point his Mum recommended using concealer and foundation to even it out. Worried it would look too “girly”, he admits that when he looked in the mirror he just couldn’t believe how much better this skin looked.

As a result MMUK, and many of the brands that have followed, have put the emphasis on makeup for men being subtle, to the point where no-one would even notice you were wearing makeup. This has driven a rise in makeup products and packaging from beauty giants incorporating this ethos, and now there are entire gender-neutral ranges.

Getting started with makeup for men can be daunting. We highly recommend starting off with concealer, to conceal acne or acne scars, to remove dark circles or eye bags and to give you the appearance that you’ve had eight hours of sleep, even if you’ve had a late one.

You can then build up to foundation and other products designed to balance out your skin tone, remove redness and pigmentation. Then there are eyebrow and beard fillers, for any patches you may get, lip balms to soften your skin, and powders to reduce how oily your skin may look.

In many instances, men can buy makeup from traditional beauty lines. There are a number of differences between the skin on men and women – on one hand, men produce more collagen so they show signs of ageing later, or slower than women, but on the other hand, men’s skin also produces more sebum, which is what makes skin oily, increases the size of pores and makes men more prone to spots.

If you fall into the latter category, always look out for products that are “non-comodegenic.” You can read more about what this means, here. 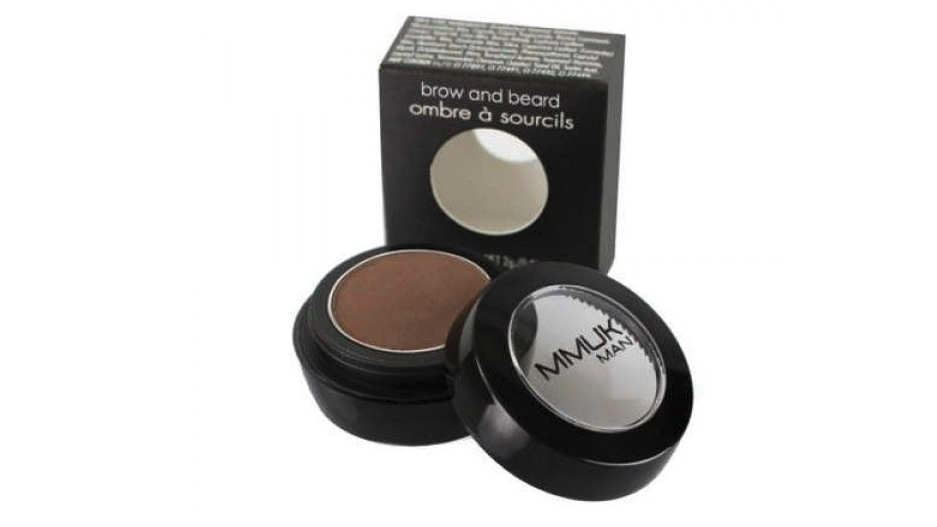 This leading men’s grooming brand launched in 2011 by Alex Dalley, who used his mum’s makeup to cover his acne. It has been seen in GQ, Esquire and Men’s Health and its bestseller is the MMUK Man Under Eye Concealer MMUK MAN have designed this to give great natural results, easy to blend to give a seamless and subtle look.MMUK has bold black matte packaging which we think wouldn’t look out of place in a man’s bathroom.

MMUK has a wide range of men’s makeup, from foundation, concealers, and bronzers, and they’ve all been designed by men, for men.

Not only does MMUK sell a luxury range of makeup, but it also has its own skincare range for men. Plus, MMUK has taken its time to make “how-to” videos for each product so men can feel confident in applying makeup.

If you’re not sure about what shade to buy online, the site offers a service where you can send a selfie, and the firm will match you with the correct shade. 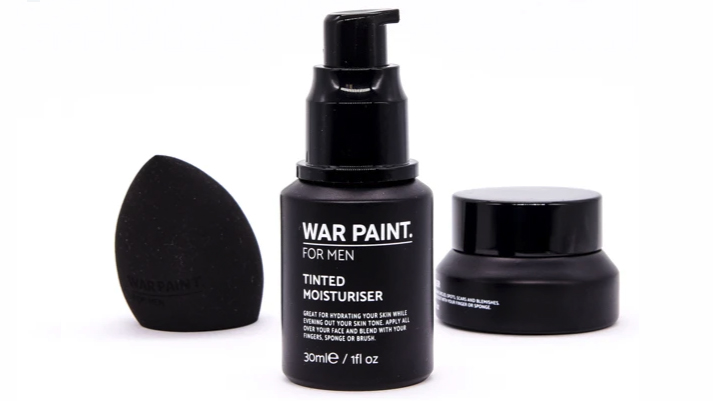 Founder Danny Grey formed War Paint with the aim of changing how people think about men’s makeup. Despite not being the first brand of its kind, it did generate a lot of publicity when Danny appeared on Dragon’s Den. All five of the TV dragons expressed an interest in backing the business and, following a trial in John Lewis, War Paint for Men sold more than 50,000 products in its first year. More than five times the forecast Danny made in his Dragon’s Den pitch.

After being bullied when he was young for his appearance Danny started to obsess about the way he looked to the point where he developed body dysmorphia. Danny started to use his sister’s concealer to cover up spots as a teenager and that changed this life forever.

The whole ethos behind War Paint is to make sure men of all demographics can shop with confidence, and without judgement. Its entire range is cruelty-free, vegan-friendly and produced in the UK. The website contains numerous video explainers and tutorials, and you can buy products individually or as sets designed to ease you in gently. Our fave is the Daily Essentials Set (£37) which contains a tinted moisturiser, concealer and face sponge.

Just like MMUK Man, War Paint will match your selfie to the best shade for your skin. In addition to selling online, the brand is now a permanent fixture in John Lewis, as well as Reiss and Harvey Nichols. 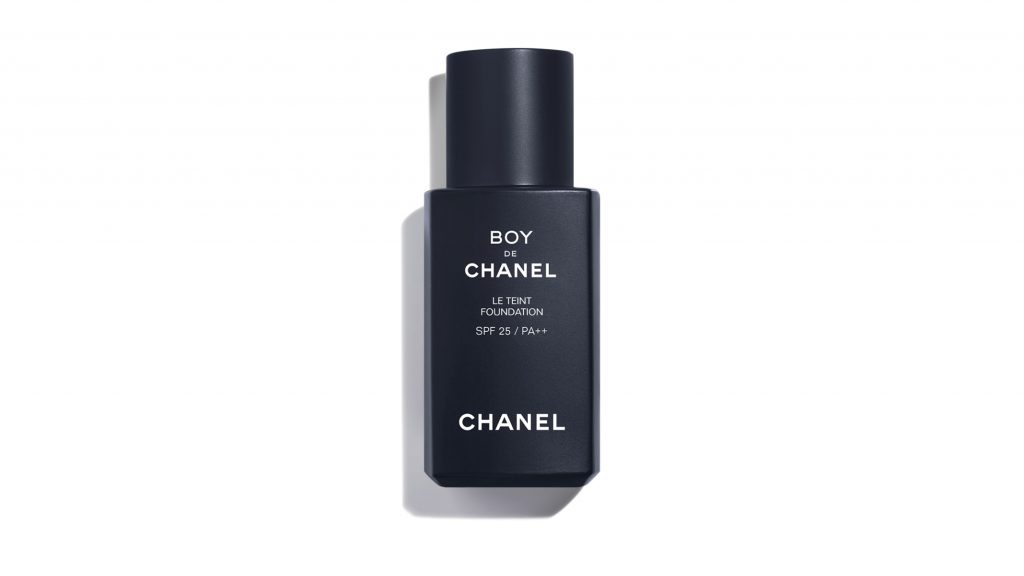 Luxury brand Chanel was one of the first established brands to enter the makeup for men space and it now sells six products in its Boy De Chanel range.

First launched in 2018, the brand was devised with the tagline “Be only you” and, at launch, it sold foundation, lip balm, and an eyebrow pencil. It has since added a concealer, nail polish and a 3-in-1 eye pencil.

Our favourite product is the Boy De Chanel Eyebrow Pencil. It gives your brows a naturally defined look, and it can also be used to fill in patches in your beard, too. The retractable pencil is easy to use, and the dual-end means there is a brush that can be used to tidy up the brows.

Being a waterproof formula means it’s also sweatproof so there’s no need to worry about it running dye down your face! 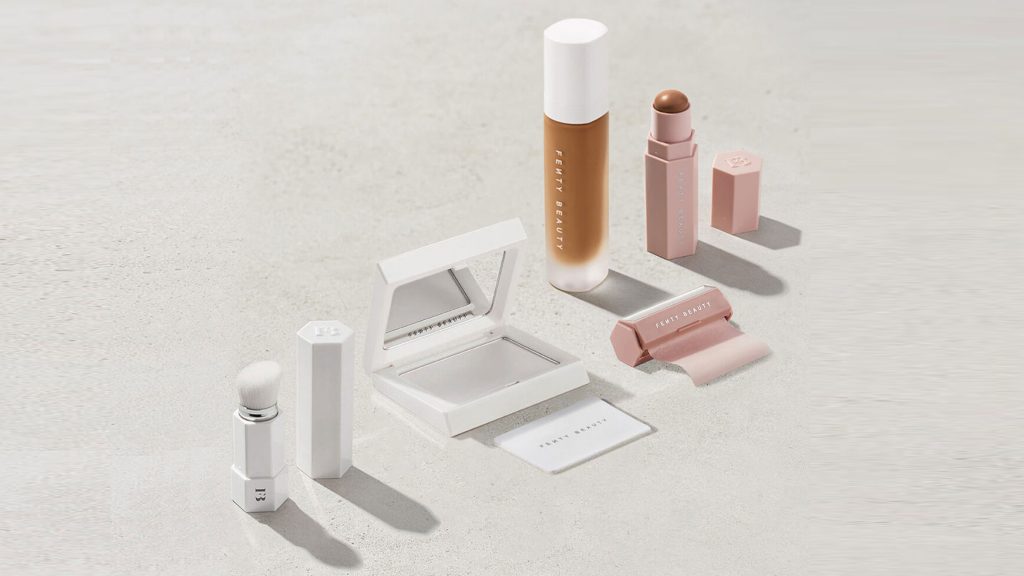 Rihanna created Fenty Beauty and Fenty Skin to be gender-neutral. Rather than focusing on makeup and skincare just for men, or just for women, she created the range based on skin tones and types.

Daniel Kaluuya, star of Black Panther and Get Out hit the red carpet for the Academy Awards wearing Fenty Beauty Pro Filt’r Foundation and he looked healthy and glowing. The makeup was so subtle, you couldn’t tell he was wearing anything.

What’s more, the entire Fenty Beauty range is highly inclusive which means the foundation, alone, is available in an incredible 50 shades. By comparison, MMUK Man and War Paint for Men top out at around eight…

With it being a hydrating foundation, it won’t dry out your skin and because it’s lightweight, it will give you subtle coverage. If you’re not sure what shade you need, Fenty Beauty has a free shade matching service online, just book an appointment online and their advisor will handpick the best foundation match for you. 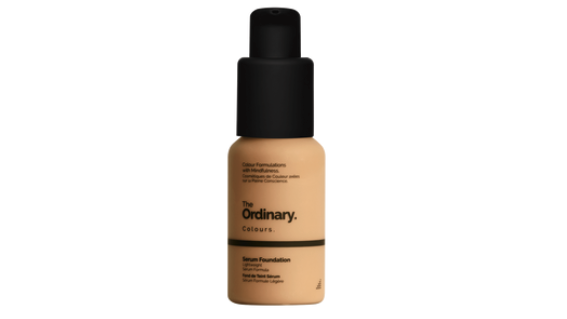 The Ordinary is a world-renowned, highly rated skincare brand that is ridiculously cheap. We’re talking less than a tenner for most things, and less than a fiver many. Since it hit the industry in 2016 it has skyrocketed ever since. It’s also one of the best cheap makeup brands around. Our sister site mamabella loves The Ordinary because of the sheer quality of products, and their favourable price tags.

The Ordinary launched its Colour makeup range in 2017, which consisted of two foundations. A standard foundation, and a Serum Foundation (£5.70) that is more subtle and comes with skincare benefits. It’s the latter that is particularly well suited to male skin.

It’s lightweight and gives moderate coverage for blemishes. It evens out the skin tone, and it comes in 21 shades. Giving the skin a natural look and feel, you’ll feel like you’re not wearing anything. The foundation is supplied with a pump but you can opt for a glass dropper (sold separately) if you want greater control over how much you’re using.

Recently, The Ordinary released its very first concealer, which offers the same 21 shades as the foundation range. This concealer gives really high coverage, so less is more, but the finish is natural and blends in well. 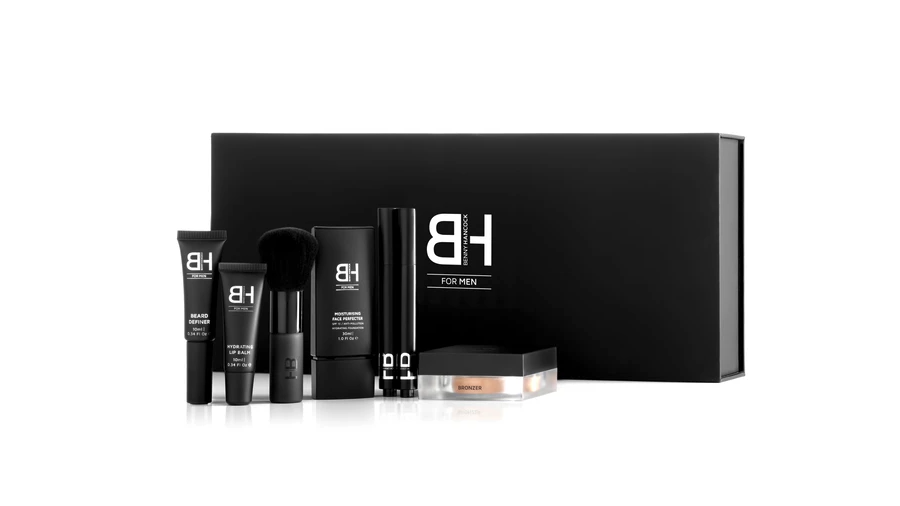 Benny Hancock is a global pro-makeup artist, he has spent more than a decade working with celebrities and supermodels and knows men’s skin really well. All of Benny’s products give a natural finish and are designed to look sleek with minimum fuss.

We are super keen on the Classic Maintenance Set. This three-piece set is so simple to use – you get a corrective pen, hydrating lip balm and brow definer pen. We especially like the brow definer, the tip of the definer pen has ridges so it brushes and tidies up the brows and sets in place. It comes in two colours, to fill in any gaps, and there is a clear gel to keep your brows in line. 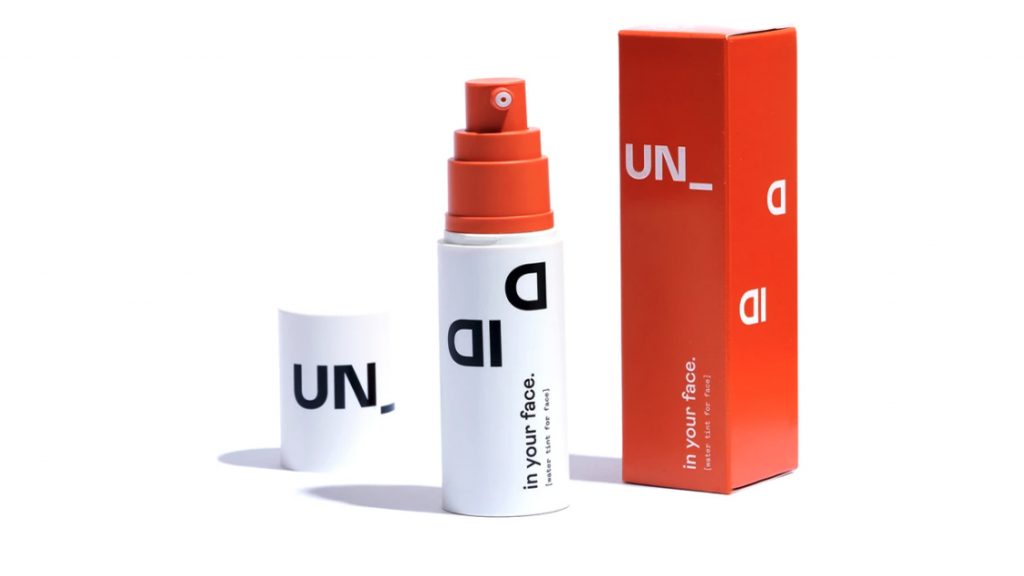 UN_DID is on a mission to break down bias and stereotypes in beauty. What we love about this brand is that its products are multi-purpose, the UN_DID foundation is part-moisturiser, part skin-serum and part-foundation.

This means it gives you skin care and boosts your complexion for one single price. The brand calls its foundation Water Tint, and it has a blend of glycerin and hyaluronic acid to keep moisture in the skin. Aloe vera and chamomile then soothe any redness and help reduce blemishes.

It’s so lightweight it’s like water and gives a natural matte finish with sheer coverage, meaning it still shows freckles if you have any but hides what you want to conceal.

How to prevent hair loss in men

How to shave your face, head and balls like a pro, according to science

Magic Shaving Powder: What is the £5 hair removal powder that’s all over TikTok?

Fed up with oily, spotty or ageing skin? Here’s what ‘skin food’ you should be eating